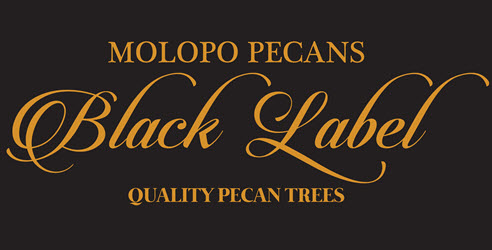 Share on facebook
Share on twitter
Share on linkedin
(This article was first posted on http://www.pecannut.co.za/pruning) Sometimes it is necessary to prune a mature tree due to overhanging branches that get in the way of routine maintenance (i.e. irrigation, planting or mowing). When the time comes to get out the Chainsaw, using proper techniques will prevent further problems. 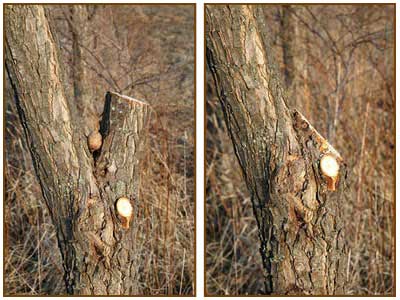 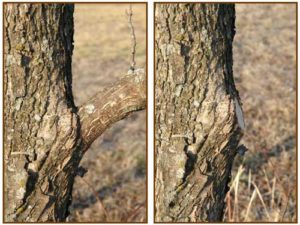 A registered plant growth regulant will control excessive growth. When applying the substance, take care to follow the directions on the label strictly. If pruned trees are treated, use half the recommended concentration.

Sometimes it is necessary to prune a mature tree due to overhanging branches that get in the way of routine maintenance (i.e. irrigation, planting or mowing).  When the time comes to get out the Chainsaw, using proper techniques will prevent further problems.

These are 2 of the most common pruning mistakes: 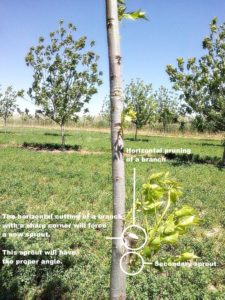 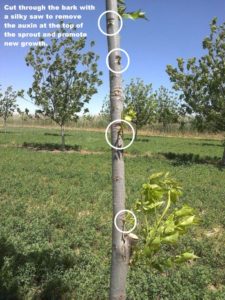 Mechanical hedging has become a standard practice among South-western US pecan growers. Trees are typically hedged (pruned on the sides of the trees) and topped mechanically. This operation keeps the tree size manageable, eliminating the need for removing trees, and it allows light to penetrate into the orchard, potentially increasing nut production on lower branches and in the tree interior. Hedging can reduce the amount of nut-bearing wood and therefore the fruit load, resulting in increased ‘on’ year nut quality. It can reduce ‘on ‘ year yield, increase ‘off’ year yield, and reduce alternate bearing intensity (Wood and Stahmann, 2004).

Although mechanical hedging has been widely adopted, there is no standard method of hedging. Individual growers each have somewhat different hedging practices. Reponses to hedging are likely dependent upon climatic conditions, variety, and orchard management. We are conducting a long-term field study to broaden our understanding of the effects of hedging on crop production and quality. In 2009, we began monitoring ‘Wichita’ trees planted in 1967 and spaced 30 feet apart in rows 60 feet apart, and ‘Western Schley’ trees planted in 1969, on 60′ x 60′ foot spacing. Both blocks are flood irrigated. The trees are hedged in the dormant season on a four-year cycle, in which every fourth row is pruned every fourth year (i.e. each row is pruned once in four years).

Starting prior to the 2006 growing season trees were side-hedged approximately 20 feet from the tree trunk, angled in at about a 50 angle. Western Schley trees are topped at 50 to 60 feet at the peak, and angled at 450. Wichita trees are topped at 50 feet. Each year we separately harvest rows of trees that were hedged

In both varieties, yields are reduced in the season following hedging. Western Schley yields increased approximately 1000 lb/a each year thereafter. The Wichita trees, on the other hand, rebounded somewhat more quickly from hedging and topping in the 2nd leaf (1200 lb/a more than 1st leaf). Third leaf yields were nearly the same as 2nd leaf; 4th leaf yields were about 700 Ib/a greater. In both varieties, kernel percentage was greatest in the season following hedging, and declined annually thereafter. Western kernel percentages over the four year cycle declined from 57.7% to 52.7% (almost 1.7% per year). Wichita declined from 62.8% to 60.1 % (about 0.7% per year). Nut size also declined with time after hedging. The size of Wichita nuts decreased from approximately 7.2 g/nut in 1st leaf to 6.5 g/nut in the 4th leaf. Western Schley nuts declined from 6.1 to 5.4 g/ nut. In both varieties, nut size declined more in the 4th leaf than in other years.

The number of stick-tights generally increased with time since hedging. Wichita had 1.3% stick-tights in the 1st leaf, which increased to 2.8% in the 4th leaf after hedging. In Western Schley the percentage of stick tights was 1.6% in the 1st and 2nd leaf, and increased to 2.3% in the 4th leaf after hedging. The amount of nuts showing pre-germination, or vivipary, varied from year to year, but apparently was not affected by hedging. In 2002 to 2006 to {hedging was initiated prior to the 2006 season} Western Schley trees exhibited a relatively uniform pattern of alternate bearing, with even numbered years being ‘off’ years, and the odd ones ‘on’ years. From 2007 to 2010, the alternate bearing pattern appears to have been considerably depressed. Wichita had a less pronounced alternate bearing pattern prior to the start of the hedging program, partly because of low yields in 2005, which should have been an ‘on’ year. Nonetheless, alternate bearing appears to be reduced since initiation of hedging. It is important to remember that the 2009 growing season was the first in which all four rows of the four-year pattern had been hedged. More seasons of data are needed to fully evaluate the effect of hedging on alternate bearing.

The information supplied on this website is used at your own discretion. Please refer to our disclaimer 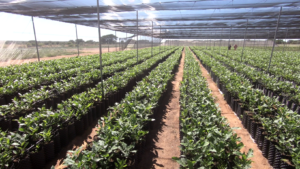 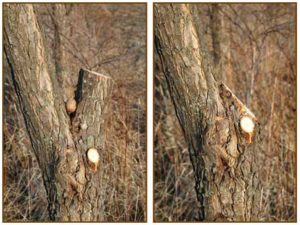 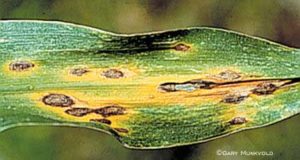